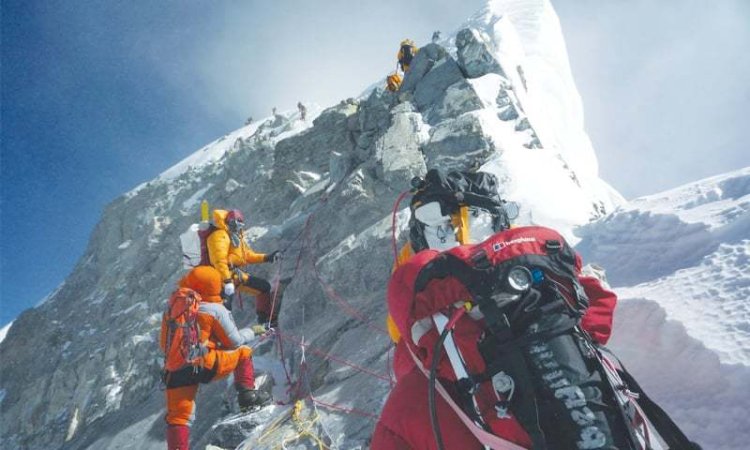 A climber from Norway hoping to summit Everest reported on Thursday that he has tested positive for Covid-19, a setback to Nepal’s hopes for a bumper mountaineering season on the world’s highest peak.

The pandemic suspended last year’s season, but the country has reduced quarantine rules in an attempt to attract more climbers besides the difficulties of treating them in case they contract the virus.

“My diagnosis is Covid-19,” stated Erlend Ness in a Facebook message.

“I’m ok now and the hospital is taking care good care of me.” Ness was taken down from the slopes by helicopter and shifted to a hospital in the Nepali capital Kath­mandu after spending time at Everest base camp.

Norwegian broadcaster “NRK”, which interviewed the climber, confirmed that a sherpa in his party had also tested positive.

“I am hopeful that none of the others caught the Corona high up in the mountains. It is very difficult to evacuate people by a helicopter when they’re above 8,000 meters,” Ness told NRK.

Breathing is already an issue at high altitudes so any outbreak of the virus among climbers unveils major health hazards.

“The plan was to move fast in the mountains to make sure that we wouldn’t get infected, but I’ve been unfortunate, and I could have favored myself when it comes to sanitary precautions,” Ness added.

A hospital in Kath­mandu confirmed it had admitted patients from Everest who had been infected with coronavirus but could not give a number.

Prativa Pandey, the medical director at Kath­mandu’s CIWEC Hospital, stated, “I can’t give the details, but some evacuated from Everest have tested positive.”

But according to Mira Acharya, a spokesperson for Nepal’s tourism department, so far, he had not received any reports of Covid-19 among climbers.