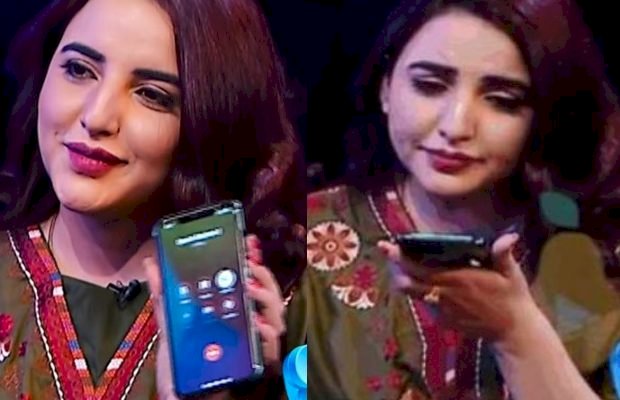 Tik Tok star Hareem Shah calls Sheikh Rasheed during an interview in the upcoming episode of Nashpati Prime and gets insulted.

The TikTok star Hareem Shah is known for having close connections with influential men. Not just in Pakistan but in the gulf too which is proved by the videos that got leaked back in 2020.

Her scandal-intended and attention-seeking move of recording the video call with Minister Sheikh Rasheed had been in heated debates all across social media. In the video, Hareem calls Sheikh Rasheed and “complains” which was actually meant as a threat that he never trusts her. She says,

“You don’t trust me even though I haven’t told your secrets to anybody.”

Then she reminds him of their intimate relations on which the minister hung up the phone.

As every attention is good attention for celebs with no talent and certainly no morals, she made use of another opportunity. In the upcoming Nashpati Prime episode, the host Tabish Hashmi asks her to call Sheikh Rasheed. She calls and he picks up the phone, then Hareem Shah says

When Sheikh says no, she keeps insisting that what’s wrong with talking now. To which he replies, “dial down this nonsense I can’t talk now,” and hangs up.

Then the audience started laughing and the moment turned into a joke. It was a good save for guests and excellent rating material for the host. Dignity and self-respect died somewhere between laughter and the end of the privacy breaching phone call. But when money and rating flows, people hardly ever care about morals.

Arooj Aftab, first Pakistani singer to be nominated for...