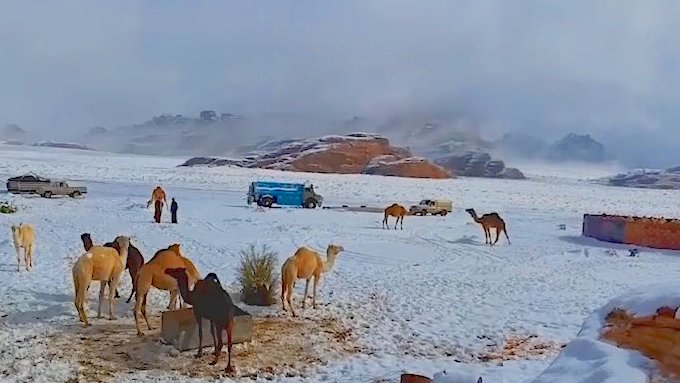 A snowstorm in Saudi Arabia is the most unexpecting thing but is actually happening. Parts of Saudi Arabia have received an unusual snowstorm as authorities issued warnings for many areas in the Kingdom.

The winter season is called ‘Kashta’ in Saudi Arabia brought snowstorms and forced people to step out of their homes to catch a glimpse of the strange and charming weather.

Some even caught camels in heavy snowfall. The Tabuk region is famous for its snowfall, the granite area of the mountain region attracts tourists during winter.

Residents and tourists visit the mountainous region to enjoy this annual winter wonder, according to local media reports.

Weather warnings for several regions across the Kingdom have been issued by Saudi Arabia authorities on Wednesday, for the upcoming weekend.

Civil defense authorities also warned citizens of the severe conditions and advised them to stay away from places that could flood. They also asked them to stay updated on any development through media and social media outlets.

Last month, surprising images of snowfall in one of the hottest Sahara Desert made netizens stunned after they went viral after being shared on Instagram.

A photographer, Karim Bouchetata captured the unexpected scenes of snowstorm in Saudi Arabia on film, whose fascinating shots display snow settling on the dry dunes of the desert.

Read More: GI of Himalayan pink salt to be registered

Some parts of Saudi Arabia also received light snowfalls with locals’ residents showing enjoyment and excitement over the rare phenomenon.