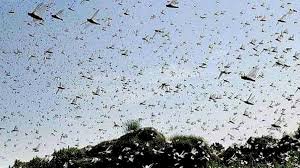 China National Petroleum Corporation (CNPC), a State-Owned Chinese Company handover a cheque of USD 100,000 to the Federal Minister for National Food Security & Research (NFS&R), Syed Fakhar Imam Tuesday to support efforts of the Government of Pakistan for controlling locust. The ceremony witnessed by the Chinese Ambassador, H.E. Mr. Yao Jing and Dr. Gu Wenliang, Agriculture Counselor/Second Secretary from the Chinese Embassy. Syed Fakhar Imam acknowledged the existence of expanding friendly relations between the two friendly countries. Agriculture is the major avenue wherein the two sides may cooperate to expand their economic relations. Federal Minister expressed gratitude to China National Petroleum Corporation (CNPC) for their gracious donation of USD 100,000 to fight locust in Pakistan. He recalled the sincere cooperation and support of the Chinese Government earlier provided to supplement efforts of the Government of Pakistan for controlling locust in Pakistan. Syed Fakhar Imam further expressed gratitude for the provision of 12 drones for locust control activities by the Ministry of Agriculture & Rural Affairs of China to our Mission in Beijing. Federal Minister said that the two sides have actively tracked our agricultural cooperation during the Second Meeting of the Joint Working Group (JWG) on Agricultural Cooperation held on April 24, 2020 via video link. Syed Fakhar Imam said that China has established its agricultural Universities on modern lines with international research standards that are producing a significant number of experts and scientists every year. Chinese cooperation will be appreciated for the capacity building of Pakistani scientists and students in various fields of agriculture. He added that technology transfer is one of the most important priority areas of the Government of Pakistan to transform the traditional agriculture sector into an advance and modernized sector based on Good Agriculture Practices (GAP). The establishment of Demonstration Centers for Chinese Agricultural Technologies & Equipment will be a landmark step in this direction. He appreciated the enormous achievements of China in the area of Agricultural R&D. Pakistan will like to learn from the Chinese experience in all walks of agriculture including crops, horticulture, livestock and fisheries. Syed Fakhar Imam said that frequent B-2-B interaction between the private sector enterprises of the two sides is essential for establishment of JVs in the areas like processing of fruits & vegetables, farm machinery and cold chain development.  Chinese companies will be facilitated for B-2-B interaction and JVs at Special Economic Zones (SEZs) under CPEC. He expressed confidence on growing bilateral relations in the right direction that are in the mutual interest of the two friendly countries.

China is assisting Pakistan for controlling desert locust in Pakistan as an emergency project. The Chinese side acceded to the request and provided 300,000 liters of pesticides and 50 sprayer equipment that had worth around USD 4.94 million. Ministry of Agriculture & Rural Affairs of China (MARA) also provided medical equipment to Pakistan to continue activities related to desert locust under the ongoing corona virus pandemic. The equipment including masks, protective suits and gloves etc was lifted by the NDMA from China to Pakistan. The NDMA distributed the equipment amongst Provincial Governments and the DPP. The DPP also received equipment including 200 protective suit, 4550 face masks, 200 goggles and 50 long shoes.The donated 12 drones have worth around USD 0.168 million.

PPP Supporters Remember The Death Of Benazir Bhutto With...