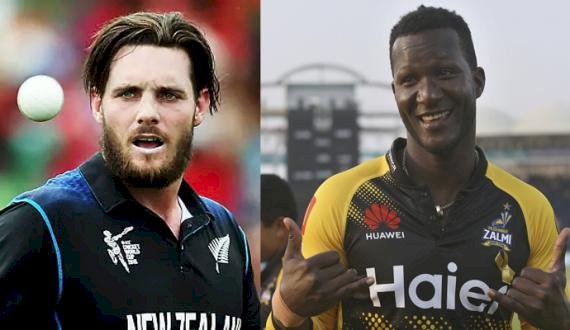 West Indies player Darren Sammy and player of New Zealand Mitchell McCleneghan have been eliminated from the Pakistan Super League season 5 (PSL) in Karachi due to different issues.

Pakistan Cricket Board (PCB) also confirmed that both the players will not be coming to Pakistan for the PSL5 remaining matches. PCB further announced the replacement of Darren Sammy, Sohaib Maqsood has included in Zalmi’s squad.

According to some authentic source, Darren Sammy booked to travel passing through the UK but due to the most recent travel restrictions, he was unable to get a suitable flight back home. He tried an attempt to travel by the US but that could not work too.

The player of the New Zealand team Mitchell McCleneghan is replaced by the South African fast bowler Wayne Parnell in Karachi Kings’ squad for the PSL5 play-off.

As said by PCB, McCleneghan was unavailable due to isolation restrictions in New Zealand imposed by COVID-19.
Meanwhile, Bangali player Tamim Iqbal has arrived in Pakistan and he is in isolation at present. He will officially join the Lahore Qalandars team once he clears his COVID-19 tests.

One more all-rounder was covid-19 positive after arriving in Karachi and moved for isolation. However, no replacement is suggesting yet as the concerned player is waiting for more tests to perform.