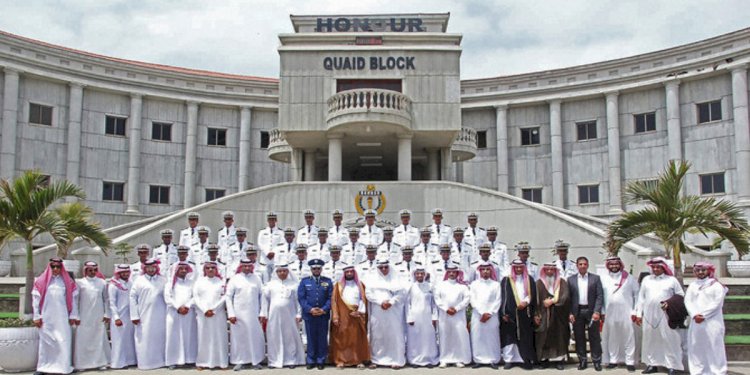 In the Pakistan Naval Academy’s 115th course engaging parade on Saturday, June 26, in Karachi, thirty-one Saudi officers were among the graduates, stated the Pakistan Navy.

23rd SSC Course Passing Out Parade and 115th Midshipmen was held at Pakistan Naval Academy, Karachi. CJCSC General Nadeem Raza was the Guest of Honour. Chief of Naval Staff Admiral Muhammad Amjad Khan Niazi was also part of the occasion. The midshipmen from Royal Saudi NF and Bahrain DF were also included in the commissioning body.

Situated in Manora Island of Sindh Province, the Pakistan Naval Academy offers initial training to the Pakistan Navy officers. It has also provided training to some 2,000 officers of few countries, including many from the Royal Saudi Navy and other Gulf countries. since its establishment in 1947.

CJCSC had praised the newly commissioned Pakistan and foreign navy officers and highlighted that Pakistan is a peaceful country with the whole nation stands united against extremism and terrorism.

“A great national achievement it is that will introduce new and young leaders for the nation,” stated Al-Malki.

Training had been provided to Saudi officers and sailors during the Saudi navy’s formative period between the 1970s and ’80s. Officers who got training by the Pakistan Naval Academy are considered some of the world’s most professional.