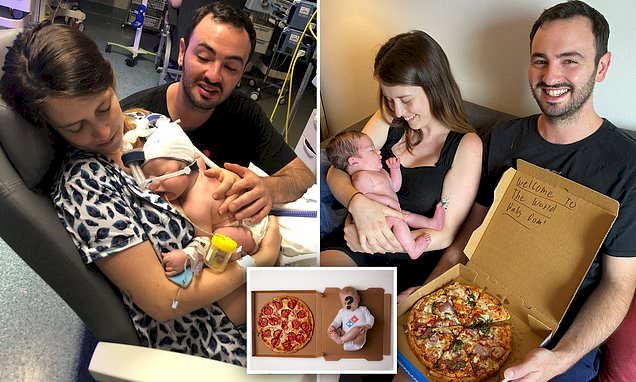 It is luck that takes you to the right place at the right time. So it happened by luck that a newborn child won thousands of dollars in a competition just after a few hours of being born.

Because of the name of the baby "Dominic Julian" his parents won a competition and bagged the award prize of 10,080 Australian Dollars, reported by the news.

In Pakistani currency, the prize money is equal to a 1.22million. The tale of how the couple won the competition includes the name Dominic, which has an American multinational pizza restaurant chain, Domino's Pizza.

Mr. and Mrs. Anthony Lot were expecting their first child but Clementine Oldfield had to go through 72-hour of labour before their lucky child was born. On December 9, Domino's Pizza announced an interesting competition just a couple of hours before the birth of Dominic Julian.

On the event of the 60th anniversary of Domino's Pizza, the company had announced that if the first child of a family is born on December 9, 2020 and is named Dominic or Dominique, then the family of the baby will win cash equivalent to 60 years of pizza. The cost for one month of pizza is $14 so 60 years of free pizza costs AUD 10,080.

Read More: How To Make Dao Dao A Noodle Soup From Gilgit Baltistan

As per the report, the two decided to name their child Dominic after Clemetine suggested it and Anthony liked it too. Meanwhile, the two were worried about the safe delivery of the baby, however, soon after the birth of Dominic, they shared the birth certificate of Dominic with Domino’s Pizza and won the competition.

The new parents are overwhelmed to receive some money at this time. Speaking about the same, Anthony said that it is a long time they were spending at the hospital.

America Donating 100 State Of The Art Ventilators To Pakistan