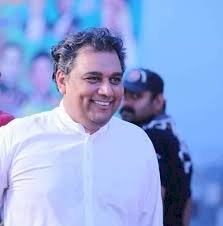 He said the new shipping policy would also generate employment opportunities for the seafarers and allied sectors. He said prime minister had approved a marine service company and it would bring a big change at the Port Qasim.Ali Zaidi said fish processing plants would be set up and under the Kamyab Jawan programme soft loans would be given to the fishermen. He said Fisheries Department would be fully revamped on modern lines.

He said the ministry was planning to digitalize the land of the Port Qasim which would be a landmark initiative of the government.He said the Port Qasim and Karachi Port Trust plots were sold or encroached during the tenure of the previous governments. He said he was thankful to Prime Minister Imran Khan for the appreciative tweet for his ministry. He said ports always play vital role in the development of cities. He said blue economy was a big challenge as people always asked him about the concept of blue economy. He lamented that our ports land were encroached.

He said due to new policies of the incumbent government, international companies were showing their interest to work with us.He said the Pakistan National Shipping Corporation (PNSC) had repaid loans of Rs4.7 billion.He said private sector was going to launch a new shipping company in the country.The minister said it was need of the hour to revive this industry as we were lagging behind our regional competitors.He further said Pakistan could save a big fortune by developing local shipping industry as it had potential to earn foreign exchange for the country.Ali Zaidi said the new Pakistan resident ship owning companies would be incentivized and pay tonnage tax of US$ 0.75 per GRT for the first five years of the shipping operations of each individual vessel' inducted by them subject to the cut off period till 2030. After five years Pakistan resident ship owning companies shall pay US$1.00 per GRT annually on the said vessels shipping operations income.The minister also shared about the achievements of the Ministry of Maritime Affairs.

According to the ministry, Pakistan National Shipping Corporation (PNSC) under the current regime added two LR1 tankers taking the total strength of the fleet to 11 vessels. The ERP solutions were acquired and PNSC would be fully digitized by November 2020.

Following, Prime Minister Imran Khan's austerity drive, 29 vehicles were also auctioned.At the KPT, construction of new boat basin jetty finished in early 2020. Bidding for Dry Bulk Terminal had been initiated. Furthermore, the financial audit of the entire organization, KPT, was going on from 2010 to onwards.Port Qasim Authority (PQA) had recorded its highest-ever revenue in the last two years. For the first time the PQA had started night navigation for large vessels in early 2019.

The first financial audit since 2008 was being conducted. During the COVID-19 crisis, when most of the regional ports had short down, the PQA handled a record 270 vessels in March and April 2020.A detail study of the new master plan for the port had completed.

The project of East Bay Expressway which was delayed for various reasons as now scheduled to be completed by the April 2021.