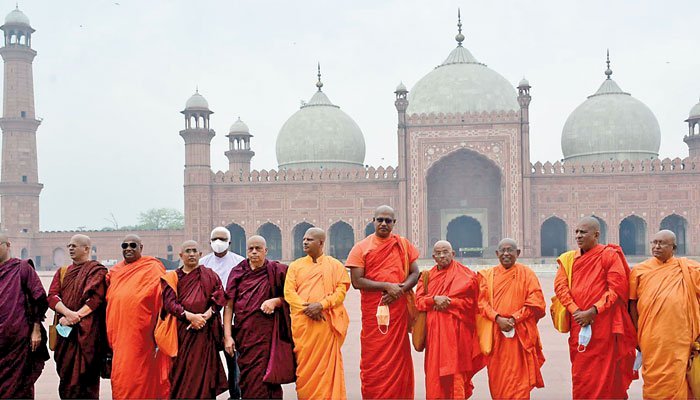 A 14-member delegation, including senior Buddhist abbots from Sri Lanka, explored various sections of Badshahi Masjid and Lahore Fort on Tuesday and admired Pakistan’s rich heritage. The delegation was directed by Dr. Walpole Piyananda, who is the monk and president of Dharma Vijaya Buddhist Vihara, USA.

The delegation left Lahore for Islamabad on Tuesday after finishing their two-day visit to the provincial capital. Dr. Piyananda stated earlier that Pakistan had always stood with Sri Lanka in the hour of need.

According to him, every religion taught a message of peace and sympathy. He is hopeful that the Pakistan government would take further measures to promote religious tourism and cherished the government‘s efforts in this matter.

As stated by him, Pakistan was home to the ancient Buddhist civilization, which remained unseen from the world.

The Buddhist delegation will travel across various Buddhist heritage sites in the country which encloses a few of the finest remains of the Gandhara civilization and rare Buddhist relics, including the 'Fasting Buddha' and 'Sikri Stupa' dating back to the 2 AD.

The tour has been arranged by the High Commission of Pakistan Colombo, Sri Lanka aiming to promote religious tourism in Pakistan by showing the historicity and warm generosity of the host nation.

The delegation’s tour includes a visit to Islamabad, Taxila, Shahbaz Garhi, Takht-e-Bhai, and Jehanabad (Swat) and meetings with the officials of the Ministry of Religious Affairs and Interfaith Harmony. It will also meet President Dr. Arif Alvi, Prime Minister Imran Khan, and Foreign Minister Shah Mehmood Qureshi during their visit.