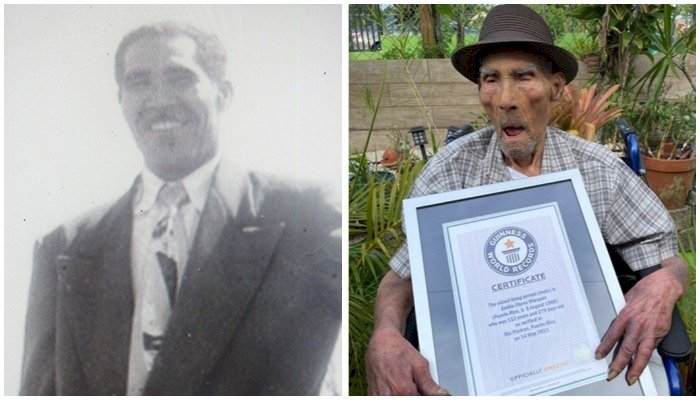 ‘Emilio Flores Marquez’ is declared as the world's oldest living man at the age 112 years and 326 days old by Guinness World Records.

Also Known as “don milo," he was born on August 8, 1908, in Carolina, Puerto Rico, and was the 2nd among 11 siblings, according to the Guinness World Records website.

Being the eldest son, Marquez had huge responsibilities towards performing tasks and bringing up his younger siblings. He began serving his father at a sugarcane farm at a very young age.

Although he lost his hearing at the age of 11 after surgery, he continued enjoying his life to its fullest.

He received his official ‘Guinness World Records title certificate’ at his home in Puerto Rico. While sharing his feelings, he stated: "All you need is to have plenty of love and to live life without getting angry."

Being in a beautiful marriage with Andrea Perez for 75 years, he and his wife completed a beautiful family comprised of four children. Unfortunately, his wife died in 2010. Today, he has five grandchildren as well as five great-grandchildren. At present, he lives in Rio Piedras, Puerto Rico, along with his two children, Tirsa and Millito who take care of him.

As per Emilio, the key to his advanced years lies in compassion.

"My father raised me with love and he taught me loving everyone. He always advised me as well as my siblings to do good, to share everything with others. In addition, Christ lives in me," he stated.

The oldest living man before Emilio, recognized by the Guinness World Records was Romania’s Dumitru Comănescu (birth date. November 21, 1908). He kept the record just for less than one month as he died on June 27, 2020, at the age of 111 years 219 days.

"It's honorable always to celebrate these remarkable human beings, and we've managed applications this year from not one but two competitors for the title of an oldest living man," stated Craig Glenday, the Editor-in-Chief at Guinness World Records.

"I am excited to feature Sr. Márquez who was born, interestingly, on the 8th day of the 8th month in the 8th year of the 20th century. He brought his fascinating story to the broader public. Besides, I am also delighted that we got the chance to pay our respects to ‘Dumitru Comănescu’, who held the record for a short time but sadly left us before we went to press."