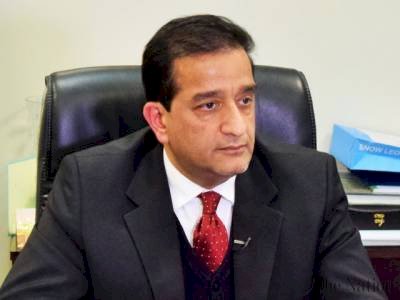 Special Assistant to Prime Minister on Climate Change Malik Amin Aslam said that the present government is well aware of the fact that engaging the youth in climate action and green activities is vital to transforming the country towards a low-carbon and climate resilient future.

Addressing a cycling rally here on Saturday as a chief guest, he said that over 60 percent of the country’s population is below the age of 30 while 29 percent is ages between 15 and 29 years. However, cannot achieve sustainable climate action through various initiatives as long as the youth bulge is not engaged in such actions.

The cycling rally held here under the theme ‘Cycling for Green Pakistan’ was held by a local organization of young students in support with the climate change ministry.

The participants pedaled their cycles from the Rose and Jasmine Garden and Islamabad Parade Ground near I-8 roundabout overhead bridge and concluded at the same.

It was attended by a large number of youth people and representatives of various governmental and non-governmental organisations including teachers and researchers.

The prime minister’s aide said that various ambitious initiatives have been launched by the incumbent government as a part of the Prime Minister Imran Khan’s vision for Clean and Green Pakistan (CGP) programme, wherein the youth are being actively engaged.

He highlighted that the CGP programme is being implemented to make cities environmental-friendly and climate-resilient with the help of 1,20,000 youth volunteers, which have been registered with the programme since its launch last year in November.

“I strongly believe that such a huge youth population of the country have an increasingly strong social and environmental awareness; hence, motivated to play their part in transforming our country as a whole towards a low-carbon and climate resilient future,” Malik Amin Aslam, he told participants, emphatically.

He pointed out that human-caused activities globally including the use of fossil fuels, deforestation and unsustainable agricultural practices, soaring use of coal for energy purposes over last several decades contributed to global warming, which made global economies, particularly in developing countries, highly vulnerable to adverse fallouts of climate change

However, these negative impacts of climate change have fast led to decline in the availability of nutritious food and clean water to millions of thousands of people worldwide including Pakistan, and destroyed ecosystems and living environments. Consequently, today millions of the people face malnutrition, hunger, diseases, and migration to safer places, rendering youth particularly vulnerable, he added.

“Given the backdrop, we must realise that it is high time that youth populations are made part of the programmes and activities related to climate change, low-carbon energy, climate smart agriculture and particularly raising public awareness, so that they would effectively pedal the global climate action towards climate-resilient future,” he remarked.

He reimphasised that the prime minister Imran Khan-led government well recognises the unprecedented role that youth can play to support the government policies framed for dealing with climate change impacts.

Given the reason, it continues to work closely with youth-led and youth-focused organizations around the country. Besides, many youth organizations are being empowered through the Ten Billion Tree Tsunami Programme, Clean Green Pakistan Programme, Recharge Pakistan Programme, Protected Areas Initiative to join government’s adaptation and mitigation actions, which would help enhance their effective participation in climate change policy decision-making processes.

“We are strongly committed to supporting and helping young people of the country raising youth voices on the climate actions and green actions to take action to drive country towards the clean and green Pakistan and to build a better, stronger and climate-resilient future for our children and young people,” he reaffirmed.