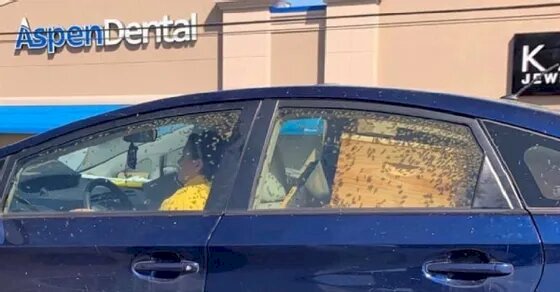 It could be the most bizarre thing you have seen recently but it may also be very real.
A picture of a woman driving a car filled with a swarm of bees has created quite a buzz on the internet.
The woman behind the wheels was snapped by someone named Jocelyn Jordan. She saw the unnamed woman driving her bee-filled Toyota Prius in Alabama on March 19th.
The picture appears to show a wooden hive in the car’s back seat, with thousands of bees filling the vehicle’s interior and windows. But, the woman seemed to be completely undisturbed by the bees.

Some eyewitnesses said that the woman was having a conversation on the phone while the bees buzzed around her.
"I just about died. I understand the hives have to be transported, but surely there’s a way to keep them contained!” said Jocelyn, who took the viral photograph.

Ehd-e Wafa To Be Screened In Cinemas