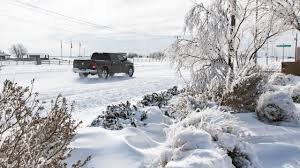 Millions were deprived of power as a deadly winter storm hit the southern and central United States on Tuesday. At least three people were killed elsewhere in unpleasant weather when a tornado smashed into their community.

Freezing conditions have caused record low temperatures to several states which were unusual, and the states were not prepared for such icy circumstances. Texas was worst affected, where arctic conditions caused utility companies to carry out rotating blackouts to stop the power grid from being overloaded by the surge in demand.

At least four tornadoes were produced by the winter storm, according to Atlanta-based weather.com. It includes one in coastal North Carolina late Monday that took the lives of at least three people and injured 10 more. The storm entered the southern part of the state late Monday, particularly affecting two coastal communities in Brunswick County.

According to Brunswick County Emergency Services, at least 50 homes were damaged in the incident and several power lines were affected, causing power outages as per estimation.

Photos and videos broadcast by US media displayed uprooted trees, crushed houses, and smashed cars. Over four million residential, commercial, and industrial customers were without electricity in Texas on Tuesday morning, according to the Poweroutage.us tracking site.

In Austin, the capital of the state, the temperature was observed as 10 degrees Fahrenheit (-12 degrees Celsius) It is quite below as per February’s average low of 45F. On the other hand, thermometers in Anchorage, Alaska read 20F.

Rare scenes were seen in Houston, where locals made snowmen and sledded. According to a local Houston resident Michael, it’s beautiful to see the white all around but very hazardous also because people here have no idea how to drive in it, as they are driving too fast.

The residents woke up to find out that most of the Deep South state turned into a snow-and-ice-covered landscape, in Mississippi.

Authorities were trying hard to clear roads, as they do not have snow plows because the state seldom needs them, reported by The New York Times. At least 10 deaths have been linked to the recent bad weather, and authorities across the US warned residents in navigating the dangerous conditions.