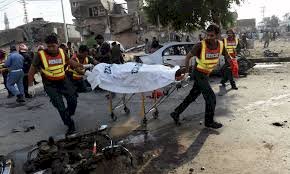 The injured people were shifted to District Headquarters Hospital, two people were in critical condition while the remaining were said to be stable.

The police and other law enforcement agencies investigated the specific area and took some suspicious people for investigation.

As per the reports that an explosive like a grenade or cracker was used on the left side of the police station and it was not intended to attack the police station. This is the second such incident in Rawalpindi in the month of December. On December 4, a blast in Rawalpindi was carried out using an improvised explosive device near Pirwadhai Police Station. In that incident, one man was killed and seven were injured.

City Police Officer (CPO) Ehsan Younas while speaking to the media said, “In the perspective of evidence collected from the crime scene, there are only 25% chances of the act of terrorism.” He further said that there are more chances that it was not an act of terrorism as a cracker or grenade was used in the act. In the past cracker or grenade was thrown at Adiala Road but the criminals involved in the Adiala Road incident were arrested.

“After this incident, we have determined to protect police stations and will deploy police in civilian clothes as well,” the CPO said adding that the people employed in the investigation of the incident, have collected strong evidence leading to the culprits.