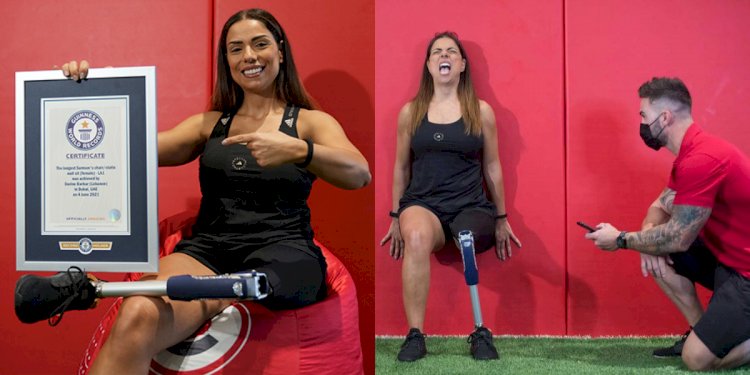 Dareen has an above-knee left leg amputation (LA1), and she tried this record accordingly with the launch of the Guinness World Records Impairment Records Initiative, which comprised of group categories with physical, intellectual, and visual impairments.

“I lost my leg at the age of 15 owing to bone cancer and met another accident in 2013 [I] which broke my left hip where my amputation is and had to insert two screws in the hip,” Dareen elaborated.

But surprisingly, Dareen’s accident led her to find her passion for sports and fitness after she had joined a gym to help her recovery.

“I joined the gym after my broken hip accident in 2013. My passion increased day by day with discovering my abilities and to what extent I can go in exercising and overcoming challenges.”

Terry Fox, a Canadian athlete, and cancer research activist was Dareen’s inspiration who also had one amputated leg.

“I am much inspired by his story and that led me to start a public profile on every social media network to share my life and fitness journey with people. The purpose was also to raise awareness towards the participation of the disabled in all aspects of life specifically ‘sports’. And how people with physical disabilities can be productive and successful irrespective of hindrances.”

Dareen, married with two children, aims at continuing to encouraging people to go beyond their limits and put their best efforts to achieve personal and physical goals. “Achieving something is always rewarding. Go for it by planning, training, and aiming.”

How To Write An Impressive Resume?