EU foreign policy chief warns about Taliban’s Behavior as the risk of terrorism if the Afghan economy collapses. 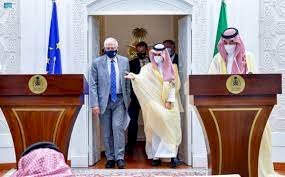 The foreign policy chief of Europen Union Josep Borrell speaking at a joint conference in Riyadh declares the Taliban’s behavior as “not very encouraging” and any economic collapse in Afghanistan can result in terrorism and other threats.

The EU diplomat, who is in Saudi Arabia following visits to Qatar and UAE briefed his partners on the idea of restarting nuclear talks and exchanged views with Saudi officials on Yemen and Afghanistan.

The EU has increased its humanitarian aid in Afghanistan since the Taliban took over and other countries along with World Bank also sent reliefs.

“Certainly it’s a dilemma.  Because if you want to contribute to avoid the collapse of the economy, in a certain way, you can consider supporting the government. Depending on their behavior, and their behavior until now is not very encouraging.”, said Borrell.

“If the economy collapses, then the humanitarian situation will be much worse. The tension for people to leave the country will be bigger, the terrorist threat will be bigger so the risks emanating Afghanistan affecting the international community will be bigger”. he added.

Lars Vilks, the blasphemous cartoonist died in a traffic accident